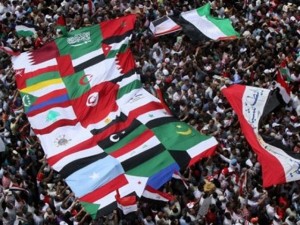 During the 2nd anniversary of the Arab Spring we witnessed mass protests and manifestations in the whole MENA region. Now, this spring is closer to a season of discontent  than to an anniversary, after 2 years protesters change their calls but continue the manifestations. Because of the different rates of change in MENA ,  the paper will resume to 3 subjects: Egypt , Yemen and Bahrain.  The main message in North Africa seems to be “dictators go but problems remain“, high levels of unemployment  and stagnating economies are still issues that need to be confronted by the new governments. In the Persian Gulf, the country that captured the world’s attention is Bahrain. The general call since 2011 is the need to change an outdated political system that recognises people’s right of participation. Finally , in the Arabian Peninsula , the political system in Yemen holds up the appearance of a transition but hides the reality of political stagnation backed by the same old elite. The following paper will try to explain the rationality behind the continuation of protests and also include a short listing of the main challenges these countries are confronting .

Egyptian democracy – Is it viable as it stands ?

Many critics think of the transitional process as one that is intended to fail the democratic standards because of the islamic influence in governance. We must be aware of the rapid pace the regime’s fall. This made it impossible for alternative political groups to organize and raise funds for political campaigns. The Muslim Brotherhood had previous experience in the political scene , while the salafists benefited from a strong infrastructure of communication with the people due to the charitable actions they initiated over the years. Nonetheless, the weakness of the opposition is a disappointment for the democratic process even if there are clear historical reasons for this. Most probably  liberal and secular parties will need time to develop, during which islamic parties will inevitably gain decisive advantages. This brings us to the next question which is :will islamic influence undermine democracy in Egypt? The main competing political parties now are formed by the Muslim Brotherhood and salafists. The later has a more radical stance on the the importance of religion in politics. The main problem is not that islamic influence may become a barrier to democracy but that the viewpoint of these parties may be in contradiction with some basic rights. Vali Nasr made a more clarifying statement: “the issue is not if islam is compatible with democracy,the problem is that the arabspring has brought to power political parties that are more committed to an islamic state “

Egypt is confronting with a  stagnant economy and staggering rates of unemployment , currently at 25 % among young egyptians.  The question here is if and how the new government will overcome the economical challenges and achieve growth . During the 2013 manifestations,  protestants are blaming the current majority and president Morsi for failing to change the socio-economic reality . But is economic recovery a question of political will or we have to accept the fact that regardless of the nature of the leaders in charge , Egypt has a long way to go on the reconstruction path ?  Because of the global crisis  financial support is more difficult to obtain , but the lack of external funds implicitly means lack of tools necessary to implement  reforms .  After the revolutions in Eastern Europe and Latin America , there were many funds invested in those countries with the objective of sustaining the process of democracy . It is unlikely that the MENA region will be the exception that succeeds without any external funding.

Changes in the civil society

The spring in Bahrain did not give birth to political changes . But the main change was in the civil society. The al-Khalifa royal family is not perceived anymore as having legitimacy to retain exclusive powers. There is a raising awareness for the need of political participation and fair allocation of opportunities.The activists demand  reforms and the adoption of a new constitution and the recognition of basic civic rights. During this year’s  manifestations, protesters  called  for  the ending of torture and arbitrary detention by the authorities . Bahrain is experiencing an ongoing political rights movement and a strong revival of the civil society . Altough we can not be certain about the political end- result , bahrainis made it clear that the arab spring chapter is still being written .

Monarchy’s response  – “ Ordering the tide not to come in “

The prevailing force in Bahrain is the imbalance of relations .  The government changed the narrative of the protests to a sectarian division . This is a rational strategy since the imbalance of relations is real , there is a minority governing that is sunni and a majority that has limited political rights which is shia. Playing the sectarian card also means polarizing the society . This distorsion creates an internal divide among sunnis and shias and the government wins support of the minority. However, if this strategy is deconstructed  the manifestations can illustrate a struggle between the rulers and the ruled , which  in the end “nullifies power of legitimate authority” (Tom Malinowski ). Whether or not recent initiatives for national dialogue will have a positive turnout, this still leaves a question mark on the strategy needed to solve the deficit of inclusiveness. The horizon of a decision–making process build on political consensus is improbable because it would have inevitable consequences on the distribution of power. Equally important , because of it’s geopolitical importance in the Gulf , the government received limited criticism compared to other arab authoritarian regimes. The US preferred to maintain a low profile on this matter. The arab spring in Bahrain  seems to be what human rights activist ,Maryam al-Khawaja , called “the inconvenient revolution “.

Yemen – Under the cover of transition

There are many internal factors that determined the current state of the transition process. One should take into account  that there were no prosecution  or criminal investigation of the elite belonging to the former regime. This means there was no line drawn between the interim government and the former elite.  Furthermore, the social structure in Yemen is tribal. Tribes have strong influence and power inside the national territory , which explains Ali Abdullah Saleh’s efforts to maintain a good relationship with them . The tribal leaders are not known to have a special relationship with the former president in the sense of  trust and attachment. They respond to financial  incentives and Saleh is known to “rent the loyalty “ of tribes.  Consequently, this led in the end to a rentier culture inside the state , that affects the capacity of political leaders to exercise power inside the national territory , regardless of democratic legitimacy .

The protests  in the MENA region all started at the point more or less because of the same grievances . But as it is the case for Egypt , Yemen and Bahrain they all took diverse directions and turnouts : transition , transfer of power and suppression . Even so ,  the civil manifestations still meet at  the crossroads of disappointment and resentment due to arab spring’s stalling.