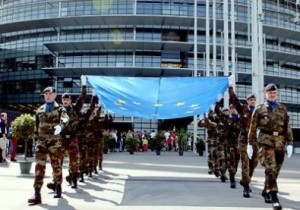 As it is known, the foundation of the European Community after World War II did not automatically trigger the establishment of a defence mechanism for Europe, but this was implemented progressively. Before the ratification of the Schuman Plan, two key moments distinguished themselves in the creation process of the security mechanism.

The first one was the signature of the Treaty of Dunkirk by the United Kingdom and France which created the context for a classic alliance and cancelled any possibility of threat from Germany. Furthermore, Germany was under occupation at that time and its armed forces were nearly abolished, so the treaty was almost in vain from this perspective.

The second key moment for the European Security was the signature of the Treaty of Brussels in 1948, as a reaction to the coup d’état in Czechoslovakia. Despite the fact that, once the North Atlantic Treaty Organization (NATO) was created, the question of building an institution for European security was put in second place, the Treaty of Brussels was modified in 1954 and the Western European Union (WEU) organization was created, with the main purpose of defending the member states.

This newly created organization was not part of the Communities. However, under the Soviet threat, France received support from the USA in its initiative to found a security policy inside the European Community. This initiative was called the European Defence Community and it had to perform based on supranational principles. Nonetheless, without the United Kingdom inside the Communities and with a sense of reluctance derived from the French National Assembly, the project was abandoned.

During the Cold War, the European states developed the Community, but without a strong desire of deepening their cooperation, they did not adopt any new plan regarding the security in Europe. The cooperation was only within the NATO structure and the real threat from USSR was the main contributor to the development of the transatlantic link.

When the Cold War ended, Europeans seized the opportunity to strengthen their construction, thus the European Community became the European Union and a mechanism for security and foreign affairs was set up: the Common Foreign and Security Policy, as it was called in 1993, without it being a real instrument to manage security problems.

Nevertheless, as a change in the British attitude, significant progress was made in terms of developing European Union’s capacity to face risks and threats. During the Kosovo conflict, the British prime-minister Tony Blair insisted on the fact that European states should develop their armies in order to become more independent and secure. Tony Blair and the French president Jacques Chirac discussed on this topic at Saint-Malo, where they agreed on a common ground to adopt a policy only for security and external action. At the Köln European Council and later on at Helsinki, European leaders adopted the Franco-British plan, created an institutional architecture and assumed clear responsibilities in this sense.

Moreover, it is worth mentioning, on one hand, the American distrust in European authorities when they proclaimed the autonomy concept in their security papers and, on the other hand, the fact that after 11th September 2001 the cooperation between NATO and EU was institutionalized. Therefore, the Europeans could appeal to NATO forces for their peace-keeping operations. In 2003, a common European security strategy was adopted and the European institutions were involved in consolidating ESDP. The main changes in the European Security system appeared when the Treaty of Lisbon came into force in 2009. So, the European Security and Defence Policy became the Common Security and Defence Policy (CSDP) and new tasks were added to ESDP list of attributes.

Due to the development of CSDP, the WEU was absorbed in the European Union’s mechanisms which had an important impact on expanding the European security actions. Using the CSDP, the European Union was involved in many coups de théâtre, such as the operations in Bosnia, Kosovo, Georgia or areas from Asia and Africa.

Currently, it becomes clear that the European Union is faced with new challenges in terms of security. In the aftermath of the economic crisis, internal problems of member states have deepen so much and so quickly that the security aspects have been put in second place. Also, the economic problems have affected the defence industry and have had a strong impact on its response capacity. Therefore, in the present international context, the European Union is coping with a large variety of possible dangers and the mission of CSDP is even harder. Still, the CSDP has continued its missions and the results are not disappointing so far.

Next month, with the occasion of the European Council meeting, security issues such as the need to develop the defence industry and to strengthen the European security will be debated. Moreover, beyond the discussions related to the CSDP mechanisms, there will probably be a chapter about the new threat coming from Syria or about the uncertainty derived from the Eastern Partnership’s problems. Anyway, this formal meeting will be a great opportunity for the European Union to enhance its security mechanism.

In spite of its relative newness, the Common Security and Defence Policy represents the core area of cooperation inside the European Union and its successful missions so far have conferred it a very important role within the European architecture. The CSDP might not be yet at its highest level in terms of ensuring security for the European Union, but the next meeting in December is undoubtedly a big chance for CSDP to reach that level.