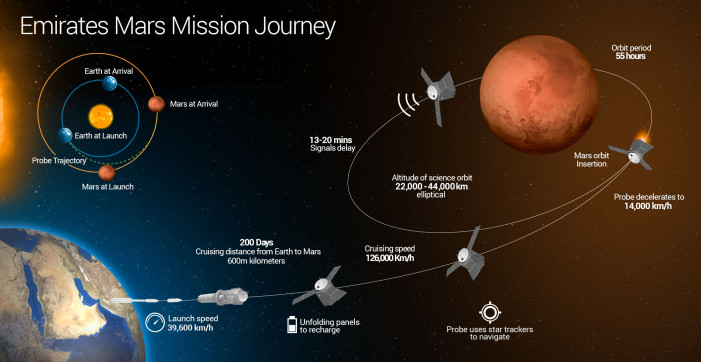 An overview of the countries with space activities has been provided by the 59th session of the UN Committee on the Peaceful Uses of Outer Space – COPUOS in Vienna.

India is advanced in space technology, its Mars Orbiter Mission (MOM) is a space probe orbiting Mars since 24 September 2014. It was launched on 5 November 2013 by the Indian Space Research Organisation (ISRO) and it is India’s first interplanetary mission. Its cost was only US$ 73 million, the least-expensive Mars mission to date. By instance NASA’s Mars Scout Program, which spawned MAVEN mission to Mars cost up to US$ 671 million.

The United Arab Emirates set up their Space Agency in 2014, joined the UN COPUOS in 2015 and they are already preparing Amal, a probe mission to planet Mars, set to arrive in 2021. The UAE’s endeavour is striking because a country with a 2-year old space agency already has top experts, many of whom women, that are working together to launch Amal, that will travel the 600 million kilometres for 200 days with a cruising speed of 126,00 km/hour.

Other countries, with limited resources but desire to have access to space technology for sustainable development have access to UN regional training centers for space science and technology education in each region covered by the United Nations Economic Commissions: Africa, Asia and the Pacific, Europe, Latin America and the Caribbean, and Western Asia. The main goal of each centre is the development of the skills and knowledge of university educators and research and applications scientists, through rigorous theory, research, applications, field exercises, and pilot projects in those aspects of space science and technology that can contribute to sustainable development in each country.

“China is so dynamic in space and more recently open to international cooperation in manned space flights”, says Prunariu. It could offer a huge advantage for other space-faring nations not having their own means to send people to outer space: “China has made a detailed presentation of its manned space flights, in 3 stages:  individual flights, flights aboard experimental space modules to a space lab, in order to test all the operations such as rendezvous, docking, fuelling, coupling of the future space station, and operations on the Chinese space station that will be operational for many, many years. Its assembling in space will start in 2018 and end in 2022. As international cooperation is vital for the development of cosmonautics and for the peaceful use of the outer space, China has proposed other nations to host international crews aboard its space station, obviously, trained in China, on Chinese space-crafts, but having the possibility to make scientific experiments in space on behalf of their own nations or the international organizations they represent. A distinct element in this cooperation, unlike previous cooperation with the former USSR or with NASA, is that China has proposed that these instances of cooperation for manned missions be made under the umbrella of the UN. UNOOSA has already concluded 2 agreements with the Chinese Space Agency in this respect. Practically, cooperation will go through 2 dimensions: country– UN and UN-China. The UN has signed therefore with China an agreement to make operational the manned flights performed by UN countries together with China. These countries will get involved in space programs that have been agreed by the UN, and these programs will benefit from the advantages made available by China in order to make experiments in the outer space”.

Indeed, the presentation of the Chinese manned space flights made by Wu Ping, deputy director of China Manned Space Agency was impressive, even for experts, who realize the huge financial and human efforts China makes. Shenzhou-5, in 2003, was the 1st Chinese manned spaceflight mission, Yang Liwei becoming the first Chinese into outer space. In 2008, Shenzhou-7 performed the first EVA- Extravehicular Activity. So far, China has carried out 11 spaceflight missions in total, 5 of which were manned missions, sending 10 persons and 12 person-times of Chinese astronauts into space and returning them safely.

The delegation of the Russian Federation made a presentation of Space Debris, Space Operations and Tools to Support Collaborative Space Situational Awareness, stressing the importance of Sharing information on objects and events in space and the deficiencies in this field: lack of a unified international cataloguing and identification mechanism for space objects, and the lack of merged information coming from various sources. “No State in the world is currently able to provide a complete and constantly updated picture of the situation in orbit on its own. Thus, there is an objective need to combine capabilities in this area…”, said Victor Shillin, researcher form the Russian Academy of Science.

Dr Dava Newman, NASA Deputy Administrator, made a presentation about the „Journey to Mars via Global Space Cooperation”, a gruelling endeavor, and very hypnotizing for countries.

African countries are end-users of space technology to meet domestic needs such as the remote sensing for identification of water sources, and natural resources.

Alaa El Nahry from Egypt presented Egypt’s use of satellites to identify water sources and the plan to launch 5 nano-satellites between 2017-2022.

The Committee on the Peaceful Uses of Outer Space – COPUOS was set up by the General Assembly of the UN in 1959 to govern the exploration and use of space for the benefit of all humanity: for peace, security and development. The task of the Committee is to review international cooperation in peaceful uses of outer space, to study space-related activities that could be undertaken by the United Nations, to encourage space research programmes, and to study the legal problems arising from the exploration of outer space. From 24 member states in 1959, it evolved to 84 currently, plus 33 observers – non-governmental and inter-governmental professional organizations, among which the Association of Space Explorers -ASE, often represented at COPUOS sessions by Dumitru-Dorin Prunariu. ASE is the international professional association of the astronauts, including over 400 astronauts from 37 countries.