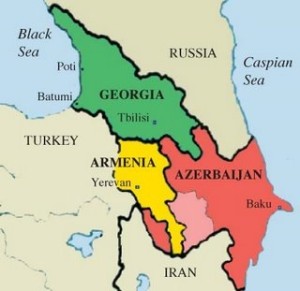 The Caucasus, a relatively small region, but one which throughout history was one of the most disputed. Its strategic geographical position and mountainous configuration have prevented the formation of sustainable and durable entities and facilitated invasions from all geographical directions. Whether they were the Assyrians, the Romans, Byzantines, Persians, the Greeks, Ottomans or the Russians, all sought to dominate the Caucasus and transform it into a border region. And when independent entities did emerge, more often than not they were small, weak and very fragile. In many respects it has identical characteristics to those of Eastern and South-Eastern Europe, representing a classic example of “buffer area” or “border area”. Nowadays, the situation has not changed significantly as the Caucasus still lay between the spheres of influence of three regional powers, which with brief episodes in history, have dominated this area for centuries: Iran (Persia), Russia and Turkey.

By looking at the region’s geography we will notice that the Caucasus countries have the same three major features that characterized them throughout their entire history:

Traditionally, Armenia was on conflicting positions with two of its neighbors: Turkey and Azerbaijan. Yerevan’s distrust towards Turkey has its origins in the history that the two states share. Armenia was under Ottoman rule until the end of World War I, a factor which combined with the Ottoman atrocities committed during the conflict, has left an imprint so strong in Armenian consciousness that even after almost 100 years the diplomatic relations between the two countries have not significantly improved. Armenia repeatedly publicly asked Turkey to recognize the crimes committed by the Ottoman authorities, to offer an official apology and to offer financial compensation, things that Turkey refused to do claiming that Armenia is deliberately exaggerating the scale of events. It is true however, that Russian influence in Armenia does contribute to maintaining this dispute in an effor to prevent any rapprochement between the Armenians and Turks.

With Azerbaijan the dispute is of another nature: purely territorial. The two countries fought a war between 1988-1994 for Nagorno Karabakh, which with Russian support was eventually won by Armenia. Regardless of the war’s outcome Nagorno Karabakh was not annexed by Armenia and in truth there was no reason for which Russia would have allowed that to happen in the first place. Following the Russian brokered cease-fire agreement, Nagorno Karabakh officialy remained Azerbaijani territory, but without being governed by the authorities in Baku. Instead a local goverment was established, currently recognized only by Abkhazia, South Ossetia and Transnistria (themselves states with limited recognition), which in all but name was nothing more than a Russian-Armenian puppet. Obviously such an arrangement could never never be compatible with either Armenia’s or Azerbaijan’s geopolitical ambitions (that was the idea actually), therefore the mutual distrust and hostility remained in place. Consequently, the border that divides the two countries remains closed to this day and diplomatic relations frozen in a state of cease-fire, which in general has been respected by both sides. There were times when tensions between the two countries resulted in isolated shootouts, but overall both have been careful enough to prevent serious violations of the ceasefire agreement.

For Russia, Armenia has a huge geopolitical value by being a foothold beyond the Caucasus Mountins, which it uses to keep in check the entire region. Realistically speaking Armenia did not have much of a choice but to remain in Russia’s orbit because it simply has no other alternative. And even if hypothetically an alternative would exist, Russia has already secured almost complete dominance over Armenia, which would prevent it from switching sides. The Russians recently obtained approval from the Armenian authorities to station the already present 5,000 Russian troops in the base at Gyumri until 2044. In addition, Russia already owns most of the Armenian energy infrastructure, railway system and most of the telecommunications companies. Finally, Armenia is part of the Collective Security Treaty Organization (CSTO), of the Collective Rapid Reaction Force and beginning with September 2013 it’s also part of the Customs Union. All these organizations are led by Russia. Armenia is thus, toghether with Belarus, Kyrgyzstan and Kazakhstan, one of Russia’s client states. Under these circumstances it may perhaps be expected that Russia would help Armenia unite with Nagorno Karabakh, but geopoliticaly such an action would make no sense because the Azeri-Armenian tensions are used by the Russians to both justify the presence of its military forces in the region, as well as a bargaining chip in its diplomacy with Azerbaijan.

Of the three Caucasian states, Azerbaijan is by far the most developed, with the most resources and with a geographical configuration less mountainous than Georgia’s and Armenia’s. Its geographical disadvantage lies in the fact that the country is completely surrounded by potential threats. Ironically though it has the greatest freedom of action. It achives this by exploiting the rivalries between the regional powers and of course through the means of its energy resources. For example, Azerbaijan exports gas to all neighboring countries, except of course Armenia. Simultaneously with this strategy, it maintains a close relationship with an external force capable of garanteeing its security, particularly against Russia and Armenia.

For many years this foreign patron has been Turkey, country with which it shares a “special relationship” and with which in 2010 it signed the Accord for Strategic Partnership and Mutual Support. Through this treaty, in the unlikely event of an aggression against Azerbaijan, Turkey has pledged to support its ally by any means necessary. This arrangement was obviously made in response to the Armenian-Russian alliance. For Turkey, Azerbaijan is a usefull tools when it comes to its diplomacy with Russia and Armenia, but also it represents a very important source of energy. Thus, Turkey has both economic, as well as geopolitical reasons to support Azerbaijan.

But even with Turkey’s backing, Russia is still able to put serious pressure on Azerbaijan if it so chooses, primarily through the support it grants to Armenia and to the authorities in Nagorno- Karabakh, but also through its intelligence services and more recently though the fact that Georgia is more open to Russian diplomacy. Or Georgia is Azerbaijan’s western corridor and the transit state for its gas exports, therefore, any political change in Georgia (especially if it’s favorable to Russia) can affect Baku’s energy and geopolitical plans. The Russians do not seek to dominate Azerbaijan, objective would otherwise be unrealistic, so instead it’s making efforts to limit Azeri energy projects which aim to give them more freedom than they already have. As an example we can mention the already abandoned Nabucco project. Also, Moscow is trying to limit the level of cooperation that Baku has with Ankara. Thus, Baku is forced to have a relatively conciliatory attitude towards Russia and will never be able to afford to kind of hostile attitude that Georgia had in the past towards Russia.

Geographically, Iran has the greatest advantage when it comes to Azerbaijan. Paradoxically, it is the state with the least influence. On the one hand that is due to the Soviet period in Azerbaijan, which systematically destroyed any cultural ties that existed between the Azeris and the Persians, on the other hand is due to the fact that Iran has preferred in the past 14 years to devote its resources to points of higher geopolitical significance (such as Syria or Iraq for example). Another possible factor may be that in the northwestern part of Iran there is a considerable Azeri population, a factor that could be used by Baku to create instability in Iran. Given these circumstances, Iran has avoided any serious conflict with Azerbaijan and it has limited to mostly intelligence actions. Baku has however drawn more attention to itself because of the military and economic relationship it has developed in recent years with Israel.

Following this approach, Baku has allowed Israel to keep fighter jets in its bases in the south and Tehran suspects that Azeri territory may have also been used as a launching pad for some of Israel’s intelligence actions inside Iran. But the Iranians have to take into account another external factor, which perhaps the most important of all: Turkey. The geopolitical situation between Turkey and Iran is complicated to say the least, Tehran must therefore exercise caution in its actions with Azerbaijan.

Georgia’s importance lies not only in its geographical position, but also that it is a transit state for Azeri gas to Turkey, but also because it has ports on the Black Sea. Georgia’s situation is a little different from that of Armenia and Azerbaijan. Although it is still a buffer state between Turkey and Russia, Georgia has not sought to ensure its security by appealing to one of the two, as Armenia and Azerbaijan have done. Instead, it tried to ensure its military and intelligence security through NATO and its economic security through the European Union, as the Eastern European countries or the Baltic States have done. Over many years, it sometimes made almost desperate effort to obtain NATO membership or at least the prospect of obtaining it. It also tried to create its own military force, using for this purpose the United States and Israel. These efforts were however thwarted by the 2008 Russian-Georgian war and by the recent political changes in the country.

After aproximately 9 years with Mikheil Saakashvili as its president, Georgia has had very tense relations with Russia, while the West enjoyed a great deal of influence. Recently though, the situation seems to have changed in favor Moscow’s favor. Officially, the relations between the two countries remain tense and Georgia is still eager to join NATO and the EU, but the seizure of power by Bidzina Ivanishvili’s Georgian Dream, a Georgian businessman suspected in having close ties with some Russian businessmen and the takeover by Giorgi Margvelasvili (a close friend of Ivanishvili’s) of the position of president, has favored a political and economic rapprochement with Russia at the expense of the relationship with the West.

But pro-Russian or not, Georgia’s current leadership has little choice but to assume a more conciliatory attitude towards Russia. In the end, geopolitics cannot be ignored and recent history has already shown that the West is unwilling to intervene militarily in Georgia’s favor against Russia. And the Russians have a wide range of means by which they can put pressure on Tbilisi: informational, economic and as it has already proven in the year 2008, military means. Therefore, it remains to be seen whether the Georgians are trying to copy Ukraine’s strategy of balancing the East and the West or if the tide is indeed turning in Russia’s favor.