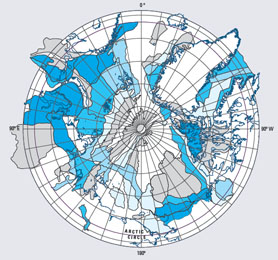 NOTE: This series is dedicated to a better understanding of the Arctic energy reserves, which may have a long-term impact on the regional and global geopolitical evolution. The first part of the series is meant to present the energy potential of the Arctic region, as it is known to date.

For the time being, geography and weather have prevented meaningful economic activity in the Arctic region. As the ice melts though, we should expect a gradual increase in activity and in the level of regional competition, as each Arctic state will attempt to pursue its own interests. The interest on the Arctic region has been sparked first by the fact that it may offer alternative shorter trade routes in the Northern hemisphere, but most of all because of its presumed mineral reserves and energy reserves, especially natural gas. The general impression is that the Arctic region holds vast quantities of such resources, with the potential for diluting the world’s dependency on the Middle East, China and Russia. That impression took birth over an extended period of time, even though no one knew for sure exactly how many resources actually are there.

Exploratory drilling for oil and gas in the Arctic region have been in progress since 1961, but mostly on land, in coastal areas or near the Arctic islands. It was only in the 2000’s that a more ambitious exploration operation was launched by the United States Geological Survey (USGS), following which in 2008 a report was released which showed what seemed to be large quantities of conventional energy resources. It is however important to note that the exploration was incomplete as it did not cover the entire Arctic region and in some cases the estimates are mere guesses. This is why it was considered necessary to include in the report the so-called “optimistic estimates, “moderate estimates and “pessimistic estimates”, between which it’s worth mentioning that there is a big gap. With all its flaws though, the survey did provide a first glimpse at the region’s energy potential. It’s also the most complete source of information to date. And according to the USGS survey, if we are to make a gross interpretation of its estimates, than the Arctic region is indeed amongst the richest regions in the world.

The region may be particularly rich in natural gas, but when it comes to oil, the reserves may not be all that high at all…unless the optimistic estimates are accurate. And there is only a 5% chance that that may be the case. So the generally shared view in regard to the Arctic energy reserves may very well be flawed from the start, because it’s based on calculations and measurements which have a 95% of being inaccurate. A more realistic view would take into account the pessimistic reserves or at most the moderate ones.

This is particularly true for energy companies which think first and foremost at the profit they could gain. There are situations in which energy resources play more of a geopolitical role and less an economic one – like some of China’s offshore oil rigs in Southeast Asia -, but in general, profit is the main objective. Needless to say, the fact that for each type of energy resource there are three different estimates is a major problem. That’s because when energy companies or governments judge potential sources of energy, they are guided by two ideas, economic recoverability and technical recoverability. And without knowing which estimate is correct they are unable to make accurate projections for neither of those.

NOTE: In the second part of this article I will present the factors which energy companies take into consideration when judging both the “economic recoverability”, as well as the “technical recoverability” of the Arctic resources.