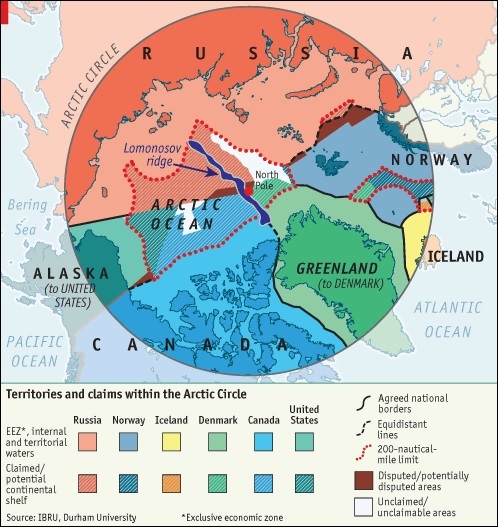 NOTE: In this second part of the series I will present the factors which energy companies take into consideration when assessing both the “economic recoverability”, as well as the “technical recoverability” of the Arctic resources.

Unlike any other region in the world the Arctic is characterized by a larger set of challenges, which make extraction and transport considerably more expensive. For example, the oil fields in Saudi Arabia do not have the long periods of darkness which exist in the Arctic region. Nor are they thousands of kilometers away from the nearest major population center. There are of course obstacles which are common to any oil or natural gas field regardless of where they are located, such as for example weather or expertise. But even in these cases there is a difference between the weather in the Arctic region and the weather in let’s say the United States or even Siberia. All-in-all in the Arctic region everything is amplified, including costs.

– onshore drilling is, for most companies, a casual issue, but offshore drilling in the Arctic is a different matter because of the harsh environment. Some companies do not have the sufficient expertise to drill in such environments, such as Russia’s Gazprom for example that relies on Statoil’s technological capacity and know-how. Gaining the necessary expertise is often expensive and sometimes it’s given in exchange for geopolitical concessions. A clear example in this sense is the 2010 Treaty on maritime delimitation and cooperation in the Barents Sea and the Arctic Ocean between Russia and Norway, through which Russia agreed with Norway’s territorial demands in exchange for its Arctic expertise.

– while the global year-on-year oil production hasn’t increased significantly, the gas production has. The increase has been made possible by the wider use of hydraulic fracturing for the extraction of shale gas, but also by the increase in the number of LNG terminals worldwide. In the United States for example shale gas provided 40% of the total natural gas production in 2012, leading to an “inflation” of gas in its market, which in turn led to a decrease in prices. And there are other countries with massive reserves of shale gas, such as Australia, Argentina, South Africa and especially China, which has the biggest estimated shale gas potential to date. Moreover, there are already countries exporting massive quantities of LNG, such as Qatar, Malaysia, Australia, Indonesia, Nigeria and many others. So for the countries with LNG re-gasification terminals there are already many sources of energy at their disposal. This is why countries such as China, Poland, the Baltic States, Turkey or India are planning the construction of more LNG terminals. To all the above we can add Russia’s conventional energy reserves for both oil and gas, as well OPEC’s reserves, which hold over 81% of the world’s proven oil reserves. All these places produce energy far cheaper than the one that would be produced in the Arctic. In these circumstances it’s hard to see where exactly the Arctic natural gas would fit in.

3. The lack of infrastructure and distance from major population centers

– in order to gain profit you actually have to bring the energy to market and the far North is nearly 3100 km away from any population center, anywhere around. Needless to say, building infrastructure over such long distances is prohibitively expensive. Not just that, but some of these places (e.g. Russia, the U.S. or Canada) already have an excess of energy;

– since most of the Arctic energy reserves are offshore than one would have to build offshore fields. And these require underwater pipes, which in the Arctic are very expensive and difficult to construct first of all because in the Arctic you’re dealing with water depths of around 300-1000 meters on average – they can be even bigger than that -, but also because you need to build your infrastructure from materials that are able to resist freezing temperatures. And these materials are more expensive than normal materials;

– even transportation by ship would be difficult because there is no infrastructure present. For example, in order to transport oil by ship first you need the actual pipes with which to load the crude into a tanker, than transport it to a refinery and then to the markets, either by pipeline or by ship. In order to transport gas by ship you need to be able to first liquefy it, which requires an LGN terminal. Then you need an LNG carrier, with which to actually carry the gas and which is very expensive to make. And finally you need a LNG plant with a re-gasification terminal at the ship’s destination.

– work often takes place at -40″ C, temperature at which the flesh freezes quickly if left unprotected. So heavy clothes are needed, but those hamper activity, considerably lowering the efficiency of work. Some estimates place the work efficiency in the Far North to as low as 15% to that in the milder conditions. And this percentage lowers as you get further north.

– stable ice is not as big of a problem because drilling can be made from floating ice platforms – which however depend on a stable natural ice sheet not moving with the forces of wind or currents -. But moving sea ice is the most difficult condition to drill in. In order to avoid this problem you’ve got to wait until the ice not only completely recedes, but it doesn’t come back either and that only happens a few months a year;

– additionally, the permafrost – permanently frozen ground – is becoming thinner and less frozen each year and obviously this is becoming a problem because infrastructure that has already been built on this layer may suffer damages if it unfreezes too much. This is particularly problematic for the Russians;

–  the lack of visibility is also a major problem, particularly for transportation and is usually caused not just by bad weather, but also by the winter season in the Earth’s Northern hemisphere. During the winter the maximum length of the time that the sun is completely below the horizon varies from about 20 hours at the Arctic Circle to 179 days at the Pole. Total darkness is characteristic to places closer to the Pole, while further south you have a sort of twilight.

–   the Arctic holds one of the last unpolluted habitats, but its waters are generally shallower than those of the larger oceans and seas located further to the south, which makes the ecosystems more vulnerable to disruption. And with oil and natural gas extraction and transportation, come risks of accidents.

–  modern day ships don’t simply travel on pre-arranged routes, but on routes that are monitored using expensive surveillance systems. For example covering the Northern Sea Route you have the Icewatch, which uses satellite radar technology. On top of that, in frozen places ships have to be accompanied by icebreakers, which further increase the costs. And should a ship go into an uncharted or unsupported area, if it does run into problems, the loss of that ship and the insurance costs would make its trip non-viable;

–  and it just happens that there is indeed a lack of proper navigation charts for the entire region. To have a clearer idea, in 2010 only 1/10 of Canada’s Arctic waters were charted to modern-day standards and if this task is performed at the current pace, than it won’t be completed in our current lifetime. Obviously, as the Arctic meltdown intensifies the economic interests in this region will also increase, which in turn may lead to an increase in the pace at which these routes are charted out. But that interest will not increase until the Arctic meltdown has reached a point high enough, which may take as much as 20-25 years. Admittedly, there has been a great increase in the number of ships using the Arctic passages. For example in 2013 alone, 495 ships have received permission to travel via the Northern Sea Route. However, considering that most of those ships were Russian we could assume that the increase in the number of transits has in fact geopolitical reasons, not economic ones.

– all the Arctic countries – Russia, Denmark, the United States, Canada, Sweden, Finland, Iceland and Norway – have taken into consideration the region’s potential on the long-term.

In other words, they are waiting for the ice to melt sufficiently to allow massive investment and exploitation. Until that happens each state will try to assert its own jurisdiction over parts of the Arctic in order to ensure as large energy reserves as possible. Claims have already been made over large areas and inevitably, disputed regions have also appeared. Now the United Nations – through the United Nations Convention on the Law of the Sea – has to figure out a way of solving these conflicts of interests. However, we can expect the U.N.’s ability to do so to be close to zero, which is why it’s very likely such conflicts will be solved at a bilateral level, much like Norway and Russia have done.

– assuming for a moment that the optimistic estimates are correct, those resources are scattered on a very wide surface area, virtually everywhere, which will pose problems for exploitation and transportation. By comparison, all the other energy-rich regions of the world are far more compact. Even the Russian energy reserves are concentrated in specific points in Siberia.

So, in order to answer the article’s question, we can conclude that the Arctic resources are not economically recoverable. Most of them are not even technologically recoverable. And it’s likely they won’t be so for another 20-25 years at a minimum. Even if by that time technology would have evolved sufficiently for more efficient exploitation, with much of the world currently experiencing an economic slowdown and with long-term prospects far from positive, we should still view plans for energy extraction with a great deal of skepticism. But leaving the current global context aside, the fact is that until the ice melts first, Arctic energy simply cannot be produced competitively, at least not for countries such as Canada, the US or Russia. It makes some sense for the Nordic countries – such as Norway – to develop these resources because their current energy reserves are decreasing at a rapid pace. But for the countries who already own large reserves of gas and oil it makes more sense to exploit those first, while at the same time research more efficient ways of drilling in the Arctic.