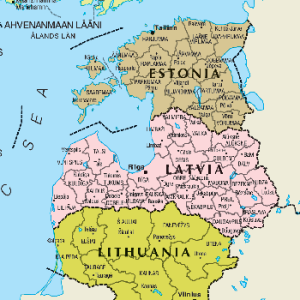 Europe’s energy dependence is no longer a secret, as is the fact that most of the gas and oil imports are of Russian origin. Russia has used its energetic supremacy with great skill, managing to wield this strategic advantage in order to fulfill its geopolitical aspirations. Some European countries have fared better than others under this pressure; but few have felt the effects of the Russian stranglehold as strong as the Baltic states.

The three Baltic states are heavily dependent on imports for their energy sectors (Latvia 60%, Estonia 22%, Lithuania 50% in 2009), and almost entirely dependent on gas and oil imports, most of which is supplied by Russia. Not only that, but the infrastructure is weak, leaving the Baltic states isolated and largely connected only to the Russian system, dating back to the USSR period.

But these states have internal problems also, which affect the situation. Heavy corruption denaturated the privatization process, leading to the situation where Gazprom controls indirectly, through shares in other companies, most of the supply and distribution systems in all three countries. Add to this the demands made by the EU and the need to comply with its new regulations, and you have a recipe for disaster.

A look at Lithuania’s situation confirms this. Prior to 2010, Lithuania’s energy mix consisted of 51% imports (from Russia), and 32$ nuclear energy, with the rest being attributed to renewables. The closure of the Ignalina power plant at the end of 2009(the only nuclear power plant in Lithuania), as a condition of its accession to EU, left the country in dire situations. The new energy mix for 2010 showed dramatic changes: 80% dependency on energy import from Russia, and only 2% from alternative suppliers.

This is not an ideal situation in any case; it’s even less so when that supplier is Russia. And we’re not just talking words. In 2003, the Russian oil pipeline company Transneft and the Federal Energy Commission decided to stop exports of Russian oil through the Ventspils marine terminal (the largest of three marine terminals in Latvia). While the official justification was the high tariffs claimed by Latvia, it’s no coincidence that prior to this incident, Latvia had refused to sell Ventspils Nafta assets to Transneft. And the scandal of the Mazeiku Nafta transaction in Lithuania is legendary. In 2 years, between 1998 and 2000, the oil supply to Lithuania was cut 9 times, in order to prevent the selling of the Mazeiku Nafta consortium to the American Company William International. At the end of 2006, when the transaction was finalized and PKN Orlen acquired some 85% of Mazeiku Nafta shares, the supply to Mazeiku oil refinery through the Druzhba pipeline was halted, under pretexts of repairs to the pipeline. One cannot help but observe a certain trend in Russia’s energy politics.

But the Baltic states are trying. Lithuania was planning the construction of a new, modern nuclear power station on the grounds of the former Ignalina, a plan that was, unfortunately, shot down by referendum in the Autumn of 2012. But the plans are in place, all investors aligned, and hope is not all lost. The Baltics have also initiated cooperations with Poland and Finland, in order to build new infrastructure and connect themselves with the rest of Europe, thus pulling them out of the isolationism they are now residing in. Also, a new initiative was signed together with other EU Baltic states such as Denmark, Finland, Sweden, Germany and Poland: The Baltic Energy Market Interconnection Plan. BEMIP sets to increase the level of integration into the EU Internal Energy Market by creating a new, fully integrated energy market between the Baltic States, through both price and infrastructure mechanisms. The other hope for the three Baltic states are the new LNG terminals planned for construction in Poland, Latvia and Lithuania.

Russia’s supremacy in the European energy market isn’t likely to disappear anytime soon, but the discovery of shell gas, and the ambitious plans set forth by the EU in regard to energy might succeed in making a dent into the Russian monopoly. But plans take time, and resources, so cutting all ties with the single largest supplier EU has is not very smart. And neither is underestimating them. No matter future developments, any single energy market EU might be able to create will have to be connected to Russia also. Any energy strategy EU might have will require a bilateral partnership with Russia. The most EU can achieve is create such a partnership in which EU and Russia will stand as equal partners – but that requires, in addition to time and resources, full cooperation and coordination between EU member states.

For now, the Baltic states will settle for not fearing their energy supply could get cut off at any second.