Whilst some schools of thought argue that poverty is the cause of many civil wars in sub-Saharan Africa, the world’s most poor region, other schools argue that poverty is also a consequence of wars, hence the two-way relationship between poverty and war. The aim of the present article is to draw attention especially to the impact of civil wars on poverty, in sub-Saharan Africa.

According to the World Bank indicators, on one hand, the poverty headcount ratio has significantly decreased between 1981 and 2010. In other words, the percentage of population living on less than $1.25 a day in sub-Saharan Africa was far less in 2010 than three decades ago or even a decade ago. On the other hand, the number of extremely poor people in sub-Saharan Africa has seen a steady increase during the same period, against the backdrop of an accelerated population growth in this region.

Combining the two measures of poverty, one can infer that despite the rapid increase in population, the share of extremely poor individuals is shrinking. Furthermore, this can lead to the belief that poverty can finally be eradicated and that the United Nation’s objective to halve the extreme poverty rates by 2015 can actually be met. 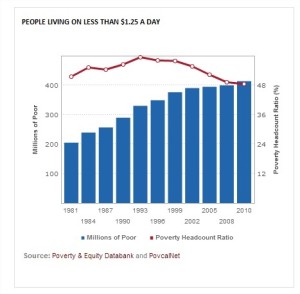 When trying to tackle the causes of poverty, institutions such as World Bank or United Nations should not overlook the impact of on-going civil wars in sub-Saharan Africa. Without neglecting other and even more direct causes of poverty in the region, such as climate change, corruption and poor education, the long-lasting conflicts are worth mentioning due to the vicious cycle they create around poverty.

The case of Sudan

The on-going civil war between the Sudanese government and Darfur, a region of Sudan, began in February 2010. The non-Arab rebels from Darfur took up arms against the government troops which they accused of apartheid. The government has in turn responded to these allegations by carrying a campaign of ethnic cleansing against non-Arabs in Darfur.

After several failed attempts of ceasefire, in December 2010, a newly formed rebel group from Darfur started negotiations with the Sudanese government in Doha, Qatar. Even though the talks did not end with a new peace agreement, the parties decided upon having a regional authority in Darfur.

However, the shaky state of peace was soon to be scattered, when the government announced the creation of two states: Central Darfur and Eastern Darfur. The rebel groups protested, stating that this would further divide Darfur’s influence, therefore the violence increased and the civil war was re-instated.

The long-lasting armed conflict in Sudan is a telling example of the complex relationship between poverty and war. On one hand, poverty is often a source of conflict for countries in sub-Saharan Africa and the rebels in Darfur did not make an exception. A political economy that set the centralizing power against peripheral regions since the 18th century and a feeling that the Northern-based government exploited the region’s resources have fueled the outbreak of conflict between Darfur and the Sudanese government.

On the other hand, more recent studies show that war has also largely contributed to the poverty in the region: Sudan currently faces a poverty rate of 46.5%, while the poverty rate in Darfur is 93%. In other words, 46.5 percentage points of population in Sudan and 93 percentage points in Darfur live on less than $1.25 a day. Infrastructure and agriculture are the sectors most affected by war. With the resources directed towards the war effort, agriculture succumbed to drought. Farmers were either driven off the land or recruited as soldiers and large areas of farm fields were laden with mines, which made them unusable for agriculture.

The conflict between Somali Republic and Kenya dates back in 1960 when Britain granted independence of the British Somaliland colony to the Kenyan nationalists. The population in that region wanted to join the newly formed Somali Republic, but Kenya’s resistance in giving up the Somali-inhabited areas generated massacres perpetrated against the Somali community. After several years of conflict between the Somali Republic and Kenya, 2012 found them joining military forces against Al-Shabaab group, the Somalia-based cell of the militant Islamist group of al-Qaeda.

Given that Somalia does not abound in resources and depends heavily on agriculture to sustain its economy, the impact of the ‘shifta’ (the Somali word for ‘bandit’) war with Kenya had even a larger impact on poverty than in the case of Sudan, which is an oil rich country. With 1.36 million people being displaced from their traditional lands, the management of the few natural resources has been abandoned, leading to unsustainable exploitation such as overgrazing, un-regulated off-shore fishing and uncontrolled harvesting of trees.

When analyzing the causes of poverty in Somalia, where the poverty headcount ratio is 43% below $1 a day, an important factor that has to be taken in consideration, in addition to the war itself, is the foreign aid, namely the failure of the foreign aid. Intending to stimulate the economy of poor countries, institutions like World Bank and IMF have sent funds and have supported the free-market economy. However, the foreign aid did not work according to plan, either because the economic environment in Somalia was not ready to adapt to the neo-liberal ideologies, or the corruption entailed a disproportionate share of donations. In this regard, economists such as Greg Mills argue that ‘Africa is poor because it is corrupt and greedy leaders keep it this way’.

To conclude, the instability of the sub-Saharan African countries such as Sudan or Somalia has highly contributed to the persistence of poverty in the region. Diverting the resources from investments in the productive sectors, civil wars have prevented the economic development. Only in the long-run and on condition that conflicts result in eliminating the corruption and in creating a stable economic environment, can the poverty be eradicated, thus breaking the vicious cycle.

Did you find this article helpful? Please donate any amount of money using the DONATE button down provided by the secured PayPal system.