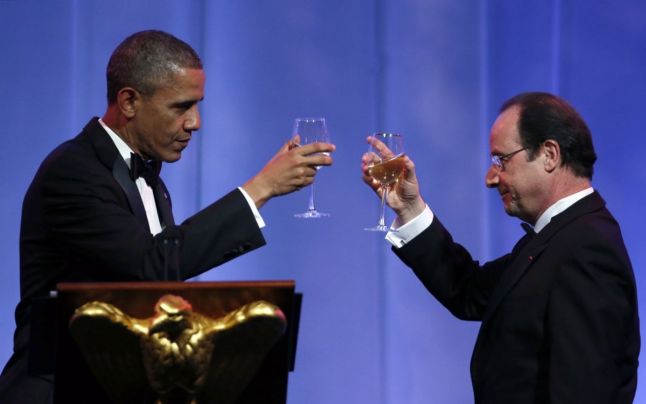 This article was published on Adevarul.ro, one of the most read newspapers from Romania.

On February the 11th, an official meeting between French President Francois Hollande and U.S. President Barrack Obama was held. During the discussion several important topics were touched, such as Syria or Iran, but even so the meeting has little geopolitical relevance, rather symbolizing a renewal of the bilateral relations between the two countries …a diplomatic way of showing that the Franco-American friendship have managed to pass over the nearly 10 years of often tense relations.

The meeting took place amid a rather complicated relationship. Until about four years ago the bilateral relations between the two countries have been mostly cold, mainly because of the incompatibility of the Franco-American geopolitical objectives, situation which manifested itself for example with the occasion of the U.S. invasion in Iraq.

Four years ago however, after an absence of four decades France returned to the NATO military command structure, which symbolized the beginning of a Franco-American rapprochement. It was symbolic because NATO remains dominated by the U.S. military forces – which make up about 80% of alliance’ total military capability -. Simultaneously, under the pressure of circumstances, the two countries have increased the level of diplomatic, informational, logistical and to a certain extent military cooperation as well, in places such as Libya, Afghanistan, Syria, Mali or Iran. Inevitably, this led to an even greater rapprochement.

We have to point out though that no matter how opposed their geopolitical goals may be at one point or another, the two countries are still members of the same military organization, they have tight economic relations – France is one of the most important destinations for U.S. exports and the U.S. is the largest consumer of French goods outside the EU – and they also have a 200-year-old alliance. Therefore a considerable break in relations between the two countries is unthinkable.

For François Hollande the meeting had an electoral purpose as well. After having been confronted with his country’s economic reality which prevented him from keeping his populist electoral promises – which basically were to solve France’s economic problems without first making structural reforms -, Hollande just went through a personal scandal as well. Because of these reasons his popularity is at a record low and thus he needs to change the public perception. Compared to French domestic policy, foreign policy is a less complicated tool do just that.

The topics discussed during the meeting

Iran – yesterday the three-day negotiations in Vienna between Iran and P5+1 (the US, UK, France, China, Russia _ Germany) over the Iranian nuclear program have started. The geopolitical reality in the Middle East will however most likely prevent them from achieving anything important. And just two and a half months after the agreement between Iran and the United States was signed, executives from French automotive and aviation companies (more than 100 of them) have already visited Iran, in a moment which could not have been worse for the Americans. Interest in Iran from foreign investors was to be expected, but given that a final agreement has not been signed yet Washington certainly was annoyed by the so early interest on the French part. After all, any extra attention could encourage Iran to either stall or to even change its diplomatic tone over its nuclear program. Thus we can assume that Obama suggested to Holland to control the number of visits made ​​by French companies in Iran, at least temporarily.

Tapping the phones of foreign officials– of course, this issue could not have left out from the agenda. However, it was most likely a secondary issue mainly because one can hardly expect the diplomats from either side to allow such issues to seriously affect the mutual relations. It would be naive to think that only the American intelligence agencies spy on foreign diplomatic phone calls, as well as it would be naive to believe that the leak of such information would not be done ​​by third parties interested in harming the relations between the French and the Americans. Thus, any degradation of diplomatic relations is often done only at a rhetorical level.

Syria – the two presidents discussed about the ongoing process of destroying the Syrian chemical weapons, the two sides showing concern towards the delay in completing this objective by the Syrian authorities. But this concern is unfounded because when the involved parties agreed to implement this plan, the obstacles that could have delayed or even blocked this process were already known. The fact that Damascus has not made ​​any progress at all in removing President Bashar Al-Assad from power was also discussed. In truth though, the removal of Bashar Al-Assad is to be negotiated with Tehran, not with Damascus (which does not have the power to remove its own president) and not even with the Syrian rebels (who are to divided anyway). All this in a context in which the removal of Bashar al-Assad would do little to solve the real problem in Syria, which is the fact that the country is led by the Alawites, which is a minority group supported by Iran. So even with the removal of Bashar Al-Assad, there would basically be no change of the regime, but just of its ruler. In many ways it would be a situation similar to that in Egypt.

Environmental protection – the two heads of state also discussed the issue of protecting the environment, Obama noting that he would like the financing for coal power plants to be stopped – with the exception of those power plants in the poor countries – . Also, Obama has shown confidence that France will sign the new coal standards which are to be proposed in Paris in 2015. When analyzing this statement though we should be aware that it’s not France who is the main problem when it comes to massive coal consumption, because most of the French energy comes from nuclear power plants. The biggest problem is China, which the biggest coal consumer in the world and who not only has no intention in slowing down its coal consumption, but it actually plans to intensify it in the coming years. The Chinese use old technologies which consume large amounts of coal, not just in energy production, but also in industrial processes, mostly because coal is the cheapest form of energy and because China has large domestic reserves – the Chinese also plan on exploiting the Mongolian coal reserves as well -. True, the United States and even parts of Europe (especially the developing countries) still use coal on a large scale, but even if France signs the new standards, it is hard to believe that it will have any significant impact at any level, regional or global.

Having the above in mind we can conclude that meeting of the two heads of state had the role of serving as a symbolic moment of diplomatic rapprochement. The issues discussed by the two and the manner in which they did it, are in no way able to make us think that something major is being planned, but we can conclude that for the present moment the geopolitical objectives of the two countries are again compatible.