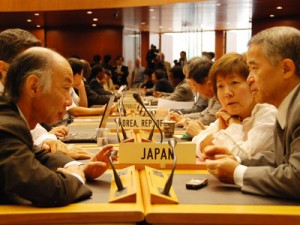 The Doha Development Agenda is the ninth WTO multilateral trade round of negotiations launched in Doha, Qatar in November 2001 that was to be concluded by early 2005. Some of the main points on the agenda were reduction of barriers in the services sector, environmental issues, and freer trade in agricultural goods. Moreover, Doha was the first WTO round in which big emerging markets like Brazil, China or India had an important saying, thus increasing the complexity of negotiations.

However, talks collapsed several times and deadlines were constantly overdue. After ten years, trade negotiators have failed to reach an agreement and it seems challenging to end the Doha Round in the foreseeable future. Due to Doha’s collapse a number of countries are resorting to bilateral negotiations or regional trade agreements instead of the lengthy multilateral process negotiations of the WTO.

The failure of Doha threatens the credibility of the multilateral trade system and raises attention on the need of reforming the outdated structure of WTO in order to reflect better the circumstances of the 21st century.

To begin with I am going to identify the causes of the Doha failure and point out how it affected the credibility of the WTO. Secondly, I will analyze the current tendency towards signing bilateral free trade agreements as well as the proliferation of inter-regional agreements. In the end I will discuss about the consequences of these tendencies in correlation to the global trade.

Causes of the Doha failure

In this section of the paper, I will identify some significant factors responsible for the round’s failure. Firstly, Doha’s failure was partly due to the divisionbetween developed and developing countries.Emerging economies have become a dominant force in the global economy and are having a stronger power of influence than ever. For example, when China entered the WTO in 2001, no one expected it to become the world’s largest exporter in 2010; now, issues like China tariff profile or renminbi value have  become of global interest  giving China great influence during negotiations. (Hufbauer; 2011)

As Susan Schwab stressed, the Doha’s round should have addressed a central question: what are the relative roles and responsibilities of advanced, emerging and developing countries? The answer to this question should have begun with proper definitions of these terms as some countries are incorrectly perceived as representing the interests of developing or emerging countries when, they in reality, have an agenda of their own. Furthermore, an appropriate response would have helped to form a better picture of what the balance of power is and how this order affects interests of each country.

During Doha’s negotiations, the emerging economies pursued maximum flexibility for their group and focused on the market-opening obligations of the developed countries. On the other hand important actors like the United States or the European Union have lost ground in negotiating. The greatest cuts in tariffs and the most significant burdens fall on the developed countries, while developing countries enjoy more relaxed cuts and slower implementation time, having significant flexibility. In this sense, we can see that the balance of power is shifting and emerging economies gain more and more influence while the US and EU are losing ground.

Another issue was agricultural trade,a sensitive topic especially for countries like US and the EU that heavily subsidy this economic sector. Negotiators showed concerned that the sever tariff cuts will affect their economies without any significant gains. So it was difficult for governments to convince domestic interest groups to agree with the tariff cuts. Nevertheless, at the Hong Kong Ministerial in 2005, governments reached an agreement in this direction (the EU agreed to eliminate agricultural export subsidies by 2013 while industrialized countries agreed to eliminate 97% of the tariffs on exports of the least developed countries).

Timing was another issue as the TPA expiration in 2007 raised concern between US trade partners about whether the US congress will accept the negotiated commitments. In addition, after 2008, the Doha round was confronted with the financial crisis and with the rapid changes that took place in the global economy which made the negotiation structure and the dichotomy between developed and developing countries obsolete.

The global trade after Doha: What’s next?

Saving Doha seems to be an impossible mission but no country wants to be held responsible for the round’s collapse. Prolonging the Doha round might end up jeopardizing the multilateral trade system as well as threaten future prospects for WTO-led liberalization and reform.

A viable option could be to salvage at least the partial agreements that resulted from negotiations and focus on launching new multilateral initiatives to restore trust in the WTO and keep the organization on track to achieving its goals. By agreeing on this terms the multilateral trade system would benefit of more credibility as it will provide near-term results. (Susan Schwab; 2010)

Nonetheless, as WTO members fail to provide a solution for the Doha a large number of countries have chosen to engage in bilateral and regional trade agreements, tendency that might indicate a reluctance towards the multilateral trade system.

Some explanations for the proliferation of this kind of agreements can be prodvided (Oatley; 2010): countries resort to FTA’s in order to avoid taking decisions they percieve as difficult as these agreements represent a quick solution. Also, countries could gain acces to a market that represents a real importance to them. Other arguments are that governements use RTA’s to convince trade parteners of their openness and investor-friendly policies but as well in order to increase their bargaining power (especially for smaller countries).

Regardless of the motivation, on the long term, the quality of those agreeements is doubtable as the wast majority exclude other trading nations, including developing countries.

Taking a realist point of view, by referring to the self-help principle: no other state or institution can be relied upon to guarantee your state’s survival (Baylis; 2011) we might understand why states are leaning towards regionalism. The logic of self-interest overcomes the interests of collective goods;  in our discussion,  ”free trade”. Furthermore, individual states believe that they could increase their wealth by pursuing the protectionist advantages of an FTA. This thinking increases the likelyhood of  other states to resort to FTA’s thus interferring with international trade liberalization, WTO’s basic goal.

The  tendency of resorting to bilateral and regional  free trade agreements has erroded political will to support the multilateral trade system as these FTA’s are being percieved as easy alternatives. Although RTA’s liberalize trade they nevertheless institutionalize discrimination through trade diversion. RTA’s could also lead to the creation of rival and more protectionist in other regions leading to a spiral of protection between these trade regions that would undermine global trade liberalization (Oatley, 2010).

Basically, regional trade agreements violate WTO’s most-favoured-nation principle but WTO could take advantage and search for provisions in those accords that, when implemented, don’t violate MFN tariffs and could be included in a plurilateral or multilateral accords.

As it was mentioned before, the Doha Development Agenda has significantly affected the faith in the multilateral trade system. For example, because of the internal problems it faces due to the financial crisis, the EU has distanced from the Doha negotiation round. Thus, the EU chose to concentrate on the regional aspect, emphasising bilateral agreements rather than putting an effort in developing global trade liberalization.

Since the latter part of the nineteenth century, states have turned to global institutions to create regulatory frameworks that help them to control global issues, like promoting global trade. These efforts to coordinate action at global level alter power politics as states have to become skilled at prevailing in diplomatic arena. States have to choose between using their power to obtain short-term advantages or grant concessions to others that may produce significant long-term benefits for all.

Even if the most reasonable choice would seem the long-term advantages, the greater good for most people, this doesn’t ensure that states would put global interests over national interests. Sometimes states don’t feel that they are responsible of promoting the sense of belonging to a world community.

Consequently, even if it might seem that the multilateral trade system is good for the entire globe, states will ultimately follow their own self-interests, especially in difficult times like that of the financial crisis. Thus, the WTO has a hard task to maintain the interest in the multilateral trade system has to be flexible and reform in order to avoid becoming obsolete. Over the course of a decade, new challenges have emerged: food security, the issue of greenhouse gas emissions, fossil fuel subsidies, undervaluation of exchange rates, all which affect more or less the international trade.

In order to be perceived like an efficient and serious organization, the WTO has to respond quickly to these new challenges as well as old ones and, if the Doha Round is becoming a weight for the WTO, they should just find a way to minimize damages and go on but in a more modern way.