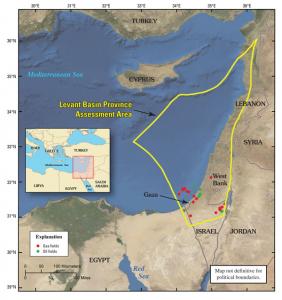 This article was translated by Robert Chirita from Geopolitics.ro

In Hebrew the word “leviathan” means “the one who gathers himself” or “the one who is taken out.” There is a lot of confusion when it comes to the word’s translation in Biblical context. At any rate, it seems to refer to a huge animal that definitely has to do with the sea.

Many would probably wonder what the “leviathan” has to do with the start of the conflict in Syria, the answer being that this name was given to the natural gas “monster” that lies in the Mediterranean Sea.

The deposit, discovered in 2010 in the Mediterranean Sea by America’s Noble Energy, is in fact the stake of Syria’s “democratization.” The drilling of natural gas has given birth to a new conflict in the region: Israel, Syria and the Gaza Strip as well claiming drilling rights.

Cyprus has not given up either, nor has Lebanon, who asked the UN to recognize her right to drill in her territorial waters, Hezbollah being the most vocal in this regard.

The construction of the natural gas pipeline started immediately and the destabilizing forces from the outside were set in motion. When the so-called revolt started in Daraa, Bashar ordered the authorities to talk to the people, to solve it peacefully.

Spurred on by the US, Turkey, Qatar and Saudi Arabia started to directly support the Muslim Brotherhood as a destabilizing element for “traitorous” regimes that negotiated the Leviathan’s potential with Iran, Russia, China and India. Turkish warships are engaged in all kinds of conflicts with American, Israeli and Cypriot prospecting vessels in the Mediterranean Sea.

Turkey imports 60 per cent of its natural gas needs from Russia and cannot allow its “historical enemy” to manage the Leviathan too. It is hoped that the advantaged will be reversed once the Muslim Brotherhood comes to power. There are no permanent friendships, only permanent interests. And in the case of the Leviathan none of the sides will give in without a fight. The rest are just empty words.

The Leviathan, not concern for the Arab people, has brought all the warships to the Mediterranean!