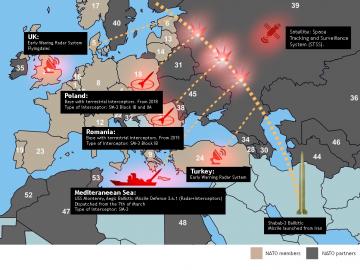 The deal between Romania and the US announced on the 3rd of May, 2011, and especially the agreement signed by both parties on September 13th, 2011, saying that Romania will be hosting an element of the American anti-missile shield has sprung some lively debates on the continent’s strategic and military balance.

Although the idea for the anti-missile shield project is not a new one, it has become one of the Bush administration priorities following the year of 2001. This project initially appeared in 1957 with the Ballistic Antimissile Boost Interceptor (Bambi) program, and it was later deactivated in 1976; it was reactivated during the Cold War by President Ronald Reagan and its main purpose was to protect American soil from soviet missiles. After the fall of the USSR, President Clinton abandoned the project, focusing on a smaller system called National Missile Defense (NMD), which only protected the army. The new millennium inherited the reality of a not so comfortable strategic nuclear plan. The disarmament did not mean letting go of the mutual destruction principle for either Russia or the US, rather it reduced the number of weapons and continued the development of nuclear and ballistic technologies. Furthermore, three more states who did not sign the Nuclear Nonproliferation Treaty – India, Pakistan and Israel – have developed nuclear capabilities, North Korea withdrew from the Treaty in 1993 and in 2006 conducted its first nuclear tests, and Teheran declared in 2010 that it has obtained 20% enriched uranium and it has joined the nuclear club. North Korea and Iran have both increased their production of medium-ranged missiles, such as Taepo Dong II or Shahab 3, the Iranian missiles being able to reach an area over 2000 km, making South-Eastern Europe accessible, as well as some parts of Russia. It has also affected the military balance against the US and Russia, who no longer produce this type of weapons. Add to this the risk of international terrorist organizations, who are well-equipped in terms of technology and military weapons and who are spread all over the Middle East. This was the general context that determined George Bush Jr. to revive the anti-missile system at the end of 2001, in the hopes of countering terrorist threats of failed states. Following the construction of two elements in Alaska and California, with 30 interceptors, the location of a third element was decided in 2006, in Eastern Europe (10 interceptors in Poland and one radar in the Czech Republic). Because the interceptors were installed 114 miles of its western borders, Russia vehemently protested against the development of this shield, which would compromise its power of military deterrence and, to show its dissatisfaction, decided to make a shield at Kaliningrad, in the west of the country. It later abandoned the decision after the new American president, Barack Obama, decided to revise the anti-missile system based on the country’s ambition. According to a report from the Pentagon in February 2010, the European element will include a gradual approach and four blocks will be built, based on Standard Missile 3 Interceptors (SM-3), which would later be implemented in four phases. At the NATO Summit in Lisbon in November 2010, it was established that the anti-missile defense shall become a part of the Alliance’s protection, and the American shield shall gradually become the United States’ contribution to NATO’s defensive architecture.

From a geopolitical point of view, we can say that beyond the official rhetoric and the Iranian or Korean threat etc., the discussion regarding the anti-missile shield can be understood in terms of offensive realism, which states that all the great powers are states who are unceasingly seeking power at the expense of their rivals, with hegemony as their final goal. The fact that the US cannot predict China’s trajectory, who is in full economic swing, the only thing that it can do to maintain its supremacy and assert its hegemony in the international system is to demonstrate its power, and this is mainly the product of the military forces it possesses.

In these circumstances, locating the anti-missile shield in Europe has important geopolitical meanings. With NATO’s expansion towards the East, the Euro-Atlantic dimension in Europe has strengthened. Romania and Poland have become allies and promoters of the Atlantic perspective and players in the american strategy in Europe. These two countries have become pivotal players for the american strategy regarding the global Hartland.

Dominating the global Balkans, defined by Zbiegniew Brzezinski as an area between Europe, the Persian Gulf and the Far East, including the Caucasians, Central Asian, Afghanistan, Iraq, Iran and Syria, represents a key element in the United States strategy to assert its hegemony. Thus, Eurasia remains the arena where the fight for global supremacy takes place. Before preserving its status, the US will have to make sure no power can take its place.

The geopolitical relevance is very large, considering this territory contains 68% of the world’s oil reserves and 41% of its natural gas and, because of this, it wants stability in the area. Add to this the fact that by 2020, the US, Europe and the Far East will have consumed 60% of the world’s oil and gas resources. In these circumstances, it’s easily understood why all the interest for this geopolitical entity as a global energy tank. Considering the interests that the United States have in this region with such a long-term geopolitical relevance, it is certainly entitled their appointment as the New Heartland or Global Heartland.

The Global Balkans’ neighboring countries – Russia, Turkey, Israel, India and Pakistan– have a reduced capacity to contribute to its stability; Israel is not involved in the GlobalBalkans, and Russia failed in the past. Due to the failure in Afghanistan, Russia no longerplays a leading role in the region, India cannot be involved because of the conflict with Pakistan, while Turkey still has to solve the Kurdish issue. In these conditions, the USconsidered the participation of the new NATO countries (especially Poland and Romania) to stabilize the Global Heartland quite useful. The access to the Global Heartland is as critical as the relevance of the Baltic and South-Eastern European countries as a secure strategic baseand the Black Sea as a safe marine route.

With the American initiative to stabilize the Caucasus, Central Asia and the Gulf, we can conclude that the Euro-Atlantic global strategy circle is beginning to close. The “Atlantic”organizations have stretched from Georgia to Kazakhstan in the former Soviet republics. The importance of Central Asia and the Caucasus to Washington can be explained in terms ofcomplex geopolitical games of controlling the Rimland; Ukraine, the Caucasus, Central Asia,Afghanistan, Pakistan, etc.. It is for Washington to go through the old impoundment doctrine. In addition, the American presence in this region does not solely comprise of a geostrategicmatter but it includes also a geo-economic component: the Caspian Sea is in the heart ofCentral Asia and the Caucasus, a sea that is very rich in hydrocarbons, the oil reservescorresponding to 5-8 % of proven world reserves and the estimated ones reaching 100 billionbarrels, estimation that continues to vary to this day. In Iraq, NATO was more involved.Basically, ever since the Cold War ended, with NATO’s expansion and the interventions in Afghanistan and Iraq, one can observe a globalization of the Euro-Atlantic civilization based onsea power, its economic ​​(free markets), political (democracy), ideological (freedom of choice)and technological  values (the Internet).

In the 21st century, the geopolitical supremacy decisions in the Heartland are geographically Eurasian, but geopolitically dominated in the Euro-Atlantic manner. The only real challenge to Euro-Atlantic supremacy cannot be from Europe, but from China, asGermany and Russia are neutralized. If China changes its political system, then it will probably threaten US hegemony. Only through this “accident” the world may move towards the Pacific era.

Thus, we can say that Romania’s integration into NATO, the deployment of American troops or the anti-missile shield development, are nothing more than the careful placing of a very important pawn in the European region, one with the geographical, geopolitical and geostrategic value capable of not only ensuring the United States’ success in obtaining global power and imposing its supremacy in the international order, but also creating a certain profile of foreign policy, correspondent with its national interests and with the image they have about themselves and the outside world, apart from safeguarding their sovereignty  and territorial integrity. Identity, image and role – concepts consistent to the constructivist current ininternational relations – therefore prove themselves of unquestionable usefulness.

According to classical realism, in light of new shifts on the international stage, the geopolitical role of a player such as Romania is forever changing, despite the fact that it would not be of particular interest for an application of international relations theory, as its capitalstrength would allow it not to aspire to systemic hegemony or regional leadership nor create a significant weight within coalitions to counterbalance the dominant actor, but to follow the onlylogical option left, meaning bandwagoning (alignment, rallying) through the merits of opportunism and / or fear, or neutrality and isolation. And, although Romania is not a great power or even a regional power, we can say that its foreign policy and geopolitical position are of interest to the rest of the international actors.

In conclusion, we can say that the placing of the anti-missile shield on Romanian territory has geopolitical and geostrategic reasons. Thus, the United States’ desire to have an invulnerable national territory, along with the attempts to “sermonize” the international strategicsystem by progressively  removing a system of deterrence regarding weapons of mass destruction, no longer appear to be their main objectives. Studying various variables, the will to increase the difference in technology from other international actors, challenging the parity withRussia and the European Union, refusal of European defense autonomy, forcing Europeanplayers to respond and to follow its new instructions and the reaffirmation of a pacifist side to the United States are only the signs of a growing hegemony.