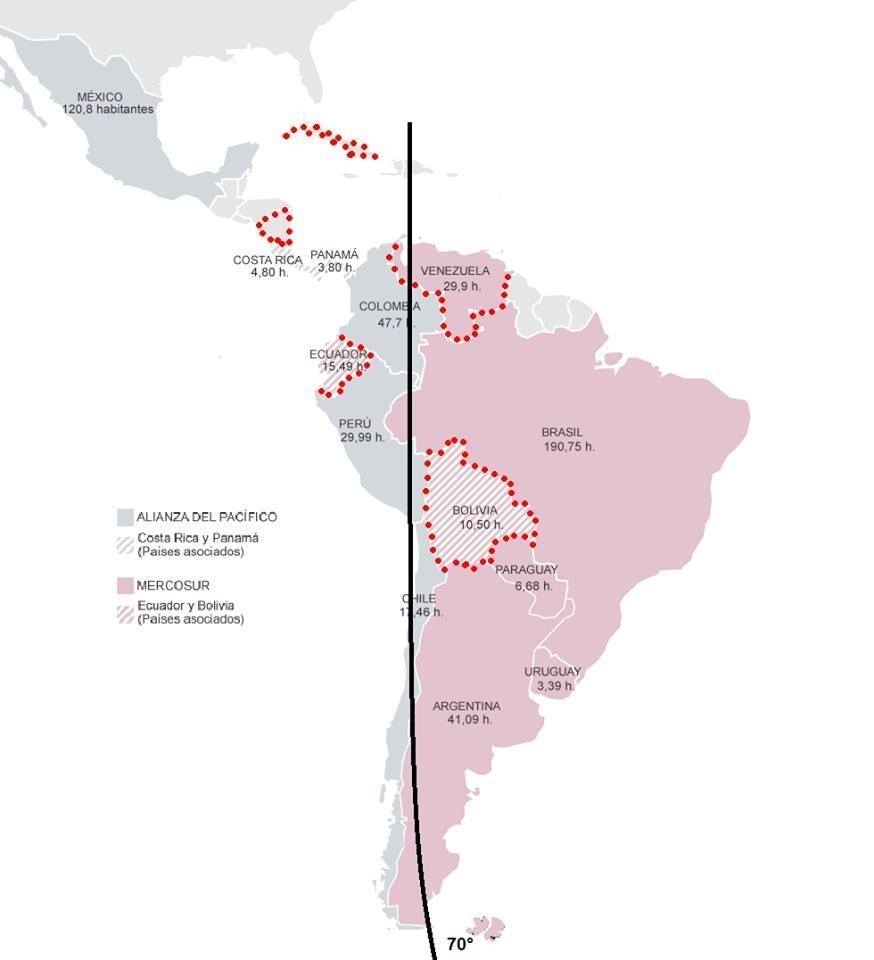 Today in Latin America coexist three different approaches about regional integration. Geographically, two of them divide the map in half. The meridian 70 ° west longitude is the imaginary line that separates the two views. We are talking about the Mercosur and the Pacific Alliance (PA) located to the east and west of the meridian respectively. Noting the following map (1), Ecuador does not belong to this geographical logic because is located to the west of the line and is a member of Mercosur. The territorial location of the state differs from the government’s logic, nearby the states in the east of the meridian.

Outside of this scheme, the third approach corresponds to the Bolivarian Alliance for the Peoples of Our America – Peoples Trade Agreement (ALBA-TCP). These states are located indistinctly on one side or another of the meridian and in the map below is distinguished by a dotted line.

Mainly by the interaction between the first two visions mentioned and their characteristics, we can reveal some geopolitical reasons present in the emergence of the PA. First and bordering the Atlantic Ocean, talk about the Mercosur countries (2) and their partners: Ecuador and Bolivia. This grouping of countries, born of the Asuncion Treaty (1991), is an imperfect customs union because not all states apply the same external tariff, and is an incomplete free trade area (5% of trade is not liberalized). Fundamentally due to the adoption of protectionist policies by Argentina and Brazil in the new century, the “liberalizing” and openness aspects of the process have been attenuated and the scheme has acquired a renewed productivist profile. The crisis of 2008 and the need to shield the economies of the debacle accentuated this situation.

On the other hand, the PA brings together four countries bordering the Pacific Ocean (Chile, Colombia, Peru and Mexico), to which are added Costa Rica and Panama as associate members. This alliance -of recent creation- is characterized by not limited only to the South American continent, in contrast, it extends to North America because includes Mexico as a member. It was formally constituted in June 2012, crowning the work done in this area since the Declaration of Lima in 2011. In formal terms, the goal of the Alliance is to deepen trade and economic agreements and integration among members. It has four pillars: free movement of goods, services, capital and people. Noting the member countries, we speak of states predisposed to trade liberalization and, in political terms, are not opposed to the dictates of international establishment. According to the 2013 ranking of the International Chamber of Commerce (ICC), these states are positioned with better scores than the Mercosur in relation to the degree of economic openness (3). 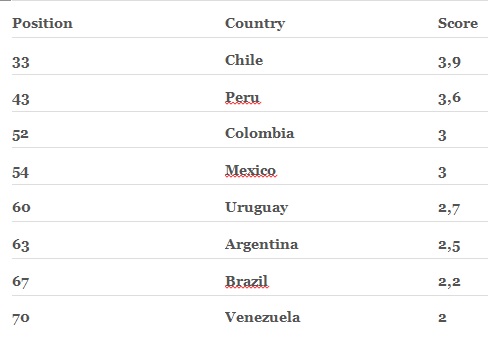 Historically, the countries with greater economic openness have had good relations with Washington and, consequently, have abided the dictates of this country without major problems. This was the case of Argentina in the 90’s, which inordinately opened the economy and aligned to the guidelines of the United States (US). Today, the countries of the PA occupy this position and, as expected, are those who maintain better links with the most powerful country in the world. In contrast, the Mercosur brings together the most adverse countries to US interests in the region. This situation led them to be more reluctant to proposals and dictates of the US. In this sense it was, fundamentally, by the work of Argentina, Brazil and Venezuela to the Free Trade Area of the Americas (FTAA), proposed by that country, was buried in 2005.

From the summit of Mar del Plata, where is buried the FTAA, the US did not abandon their aspirations and replaced the hemispheric project by strategic search of Free Trade Agreements (FTAs) bilateral. Today all countries in the PA possess an FTA with the US. These agreements, involving large -not only economic- deregulation, form a gateway for US interference in regional issues. The US need to realize bilateral FTAs is better understood if we have in mind that the new regional political situation has hindered the way for the White House.

In relation to the US strategy towards the region, the emergence of Brazil as an actor who aspires to regional leadership is another key that illuminates the deeper reasons for the PA. The consolidation of Brazilian leadership and the creation of a platform of countries to back it up -and even his participation in the BRICS-, would force Washington to talk with an equal partner. Thus, promoting an alternative to Mercosur, in the space of Brazilian influence, means complicate plans of Itamaraty. Is representative of Uruguay’s participation as an observer of the PA, done that disturbed Brasilia.

The prolongation of the PA in North America precisely in Mexico should be readed upside down. It is rather an extension of North America in South America. This prolongation is given by the complications that can arise in the region due to the close ties that the US has with Chile, Peru and Colombia, and even more, by the relations that this country has with Mexico, the partner more dependent on Washington. Additionally, in relation to the growing Brazilian role shaping the Alliance also responds to national interests of the Mexican state. Means land in the second most important player’s area of influence in America (Brazil), which is an area far distant for foreign policy of Mexico. This was already evident in the Mexican interest in the establishment of the Community of Latin American and Caribbean States (CELAC).

These dynamics are often implicit, mainly because these two visions coexist in the context of other integration processes as UNASUR and CELAC, and because they try to show two compatible possibilities for integrating the region. However, because the states are moving in the world pursuing different objectives according to their strategic considerations, it is conceivable that behind these integration schemes exist numerous reasons not expressed. In 2012, in the context of the coup in Paraguay, there was the incorporation of Venezuela to Mercosur. Many analysts have viewed this as a response to the creation of the PA in that year.

The states have not abandoned geopolitics, but nevertheless, have abandoned the position of total regional disunity typical of previous centuries. The countries pursue various national interests but are part of a Latin Americanist unprecedented spirit. This diversity guided by a common horizon is the best strategy to achieve levels of increasing unit. This community will not be realized in the short term, due to involves rebuilding a continental identity ignored for two centuries. But without doubt, the awareness of a common destiny of brotherhood in the diversity is the recommended way.