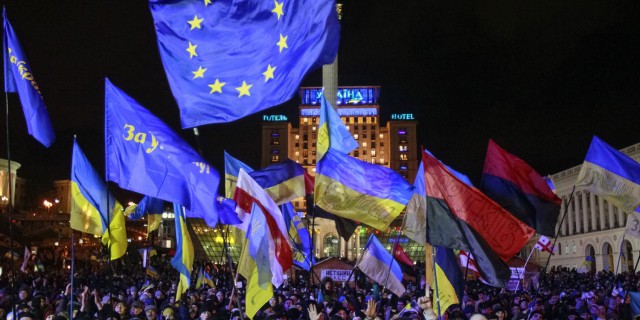 Adrian Corobană is the President of The Romanian Association of Strategic Analysis, Geopolitical Analysis and International Relations (ASAGRI).

This interview was published on Equilibrium Global (Argentina) in Spanish. Here you can read it in english.

Equilibrium Global: When the President of Ukraine, Viktor Yanukovych, refused to sign the “Eastern Partnership” with the European Union on November 28, the interests in Brussels and Moscow have been evidenced, also their explicit forms of influence. Through this event have emerged protests causing the current state of tension. How is the situation in the neighbouring country of Ukraine viewed by the Romanian public media?

Adrian Corobană: What we see now on our TV or computer screens is nothing else than a dispute for economic and political influence in a very large space between two important geopolitical blocks.

Unfortunately for Ukraine, its geopolitical condition is again against it. Ukraine has always been a frontier, a space of disputes between many geopolitical blocks. Even its name means “border” in translation.

Since November 2013, it is more obvious than ever that Ukraine has become a space of competition between the European Union and Russia. A competition for influence and economic cooperation. Ukraine is very important for Russia, because Russia is preparing a new project: the Eurasian Union. This project is designed as a counterweight to the EU project. For Russia it is very important that most of ex-Soviet countries do not abandon the Russian sphere of influence. But the most important state which should not get out of its sphere of influence is Ukraine. Russia has a defense complex, I can even say that Russia is a security maniac, it wants to control everything that it believes it can affect its security. The causes of this fear are the particularities of its territory, which makes it hard to defend. The history of Russia (The Russian Empire and The Soviet Union) was a permanent struggle to acquire territories that it can control, in order to have many buffer zones, which can protect the Russian core. Ukraine is a vast country, the biggest in Europe. It has an immense territory and it is one of those Russian buffer zones. Without the influence projected over Ukraine, Russia won’t be able to be again that superpower which can oppose USA  influence in the world only by itself.

Equilibrium Global: In South America, if the Vice President of the United States calls a President of a sovereign country to tell him/her what to do in a parliamentary session, many critics would rise. What happens in the region of Eastern Europe? What is the feeling of the Romanian public opinion? There is adherence to “Euromaidan” indifference or rejection? Could you explain some of these positions?

Adrian Corobană: I think that we are talking here about different ways of looking at the American influence. If we want to understand the behaviour and the feeling of the Romanian public opinion when an official of the United States calls a president of a sovereign country, we must look back in history. After WWII, Romania has entered in the sphere of influence of the Soviet Union. During WWII and even after, our national sovereignity was threatened. During WWII many of the Romanian territories were lost. After WWII, only some of those territories had returned to Romania. A big part of the Romanian people think that USA is a state that can protect the sovereignity of Romania. We must not forget that for many European countries, United States were the ones that saved the fate of Europe. If USA did not intervene in WWI and WWII in Europe, the map of the world would have been different now.

For us, the big threat was the Soviet Union and now we have many divergences with Russia, including the situation of Moldova. So, the countries from the Eastern Europe struggle to reduce the influence of Russia in the region (Eastern Europe).

I see a different situation in South America. I think that the countries from South America struggle to reduce the influence of USA in the region (South America). So everything is about perception. Because of its proximity, a geopolitical actor is perceived as a threat.

For us, Romanians, was always important to have strong strategic partners which are far away from our region, as was France in the past, or USA nowadays. For example, France had a great influence in the Romanian history. It was the great power which supported the formation of the Romanian state that led to reducing the influence of other empires in the region.

Equilibrium Global: What do you think is the role of the mass media on the treatment of the crisis in Ukraine?

Adrian Corobană: The role of the mass media is very important, because it provides the main information about the repression of the Ukrainian government against the protesters.

The Romanian media is very interested and wants to find out what is happening in Ukraine in a detailed manner. It is obvious why our media is so interested in Ukraine. Romania has a long border with Ukraine, almost 650 km (273 km terrestrial border). When you have a tense situation in your neighbouring country with which you share such a long border, you need to be informed and to know what is happening in that country, because it may also affect your country.

But, not only the Romanian media is interested in the situation from Ukraine. Also, the Russian media, the Moldavian media, and the European media as well.

Equilibrium Global: How can it affect Romania a change of government and a political turn of Ukraine towards the EU?

Adrian Corobană: It is difficult to predict this. First of all, I don’t believe in a political turn of Ukraine towards the EU. We talk here about the dispute between two important geopolitical blocks over Ukraine, but these actors have different ways of approach and different instruments to influence the situation in Ukraine. We have an European Union which works with standards, high standards in economy, high standards in justice, and when you are imposing this high standards on a country like Ukraine you must help it to implement your standards. While the EU has a difficult process of integration that involves serious standards and procedures that are often lengthy, the Russian Federation does not put so many conditions, Russia simply integrates. For example, Ukraine will receive financial assistance from Russia, 20 billion dollars, and cheaper gas.

The Russian instruments are more powerful than the European instruments. Therefore, I do not believe in a political turn of Ukraine towards the EU.

Equilibrium Global: The protests have been of violent form. The repression of the Ukrainian government has also been criticized for being excessive. But through protests, opponents have gained press and have moved towards possible political outcomes. Can this become a precedent for Romania? Can it affect Romanian institutions?

In Romania, we had a national consensus, especially at a political level. In 1999, we chose the Western way. Our aspiration was to become a member of the European Union, and in 2007 this became a reality. Romania’s European path is irreversible. Romania is already a strong democratic country, with strong democratic institutions and the rule of law is present in our country. Romania is one of the 28 member states of the European Union and is a NATO member. Therefore, I do not see how Ukraine could become a precedent for Romania.