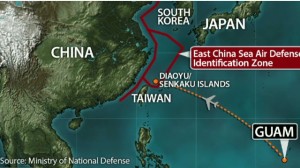 The tense relations between China and Japan are well-known nowadays. However, last month animosities increased when China expanded its Air Defense Identification Zone (ADIZ), overlapping the ADIZ of Japan, South Korea and Taiwan. In addition, the new ADIZ encompasses the long disputed Diaoyu/Senkaku islands in the East China Sea and as if all this was not enough, China’s Foreign Ministry has indicated plans to establish a second ADIZ over the South China Sea.

An Air Defense Identification Zone (ADIZ) is an area that expands beyond a country’s airspace which is 12 nautical miles from its coastline and has the purpose to give its military the necessary time to respond to potentially menacing foreign aircraft. In other words, the ADIZ is a buffer zone outside a country’s sovereign airspace that requires any foreign aircraft to identify itself, to file flight plans and follow strict instructions from their authorities on entering the ADIZ. Yet, the ADIZ is not something regulated by the international law or by any international organization. Therefore, every country can apply its own rules in defining the ADIZ and can declare it unilaterally.

What caused the already volatile relations with Japan, South Korea and Taiwan to worsen was not so much the extension of the ADIZ itself, as it was China’s attitude when it took this initiative. In contrast to other countries such as Canada, India, Japan, Norway and the United States, China requires the identification of military as well as civil aircraft.

On one hand, the Chinese Defense Ministry Spokesman, Yang Yujun, tried to reassure its neighbors, stating that “the purpose of the East China Sea ADIZ is to safeguard territorial and airspace security” and that it “does not mean the expansion of territorial airspace”. On the other hand, China is firm on its decision regarding the new ADIZ and “will take measures to deal with diverse air threats to firmly protect the security of the country’s airspace”, according to China’s state news agency, Xinhua.

Why has China extended the ADIZ?

According to The Economist, China’s initiative to expand its air defense zone “came out of a clear blue sky”. Other publications suggest that it was driven by its growing economic power or that it is part of a strategy to exert control over international waters.

Whatever the reason may be, China’s move created quite a stir among its neighbors. Japan’s Minister for Foreign Affairs expressed his concern towards the change of the status quo in the East China Sea. Furthermore, Japan is not willing to recognize de Chinese ADIZ since it encompasses the long-disputed Diaoyu/Senkaku islands. Regarding South Korea, the nation’s defense ministry spokesman, Kim Min-Seok, said that the expansion of China’s ADIZ overlaps with Korea’s jurisdiction in Ieodo, also known as the Socotra Rock, the submerged rock disputed by both China and South Korea. As for Taiwan, it seems to be completely marginalized and its call for ownership over the same Diaoyu/Senkaku islands has been ignored by China and Japan.

The U.S.A., acting as the main ally of Japan in the region, does not comply with China’s requirements after the reconfiguration of its air defense zone. They sent two B-52 unarmed bombers over the Senkaku islands on November 26th, on what was claimed to be a regular exercise, thus without filing flight plans or registering their radio frequencies. “These flights are consistent with long standing and well known U.S.A. freedom of navigation policies.” Pentagon Colonel Steve Warren said. 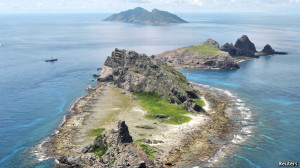 The background of the disputed islands in the East China Sea

The new ADIZ announced by China on 23rd of November reopens the dispute over a group of uninhabited islands known as the Senkaku Islands in Japan, the Diaoyu in China, and Tiaoyutai Islands in Taiwan.

The islands came under the American government occupation in 1945, after the surrender of Japan ended World War II. In 1972, the islands were returned to Japanese control, since the Okinawa Reversion Treaty passed the U.S.A. Senate a year before. At this point, the Taiwanese and Chinese governments officially declared ownership of the islands. China and Taiwan argue that documentary evidence prior to the First Sino-Japanese war in 1894 indicates Chinese possession and that the territory is a Japanese seizure that should be returned to China. However, in September 2012, the Japanese government purchased three of the disputed islands from their ‘private owner’ prompting for large-scale protests in China.

A pertinent opinion on which country is more legitimate to require ownership over the East China Sea Islands was expressed by Robert Daly, Director of the Kissinger Institute on China and the United States. He stated that “what is clear is that this conflict will not be solved based on historical or legal arguments.” He also added that “sovereignty will be worked out through future actions and attitudes, not by appeals to the past.”

The geopolitical consequences of China’s move

Some voices like the United States’ Defense Secretary, Chuck Hagel, argue that China’s move was a “destabilizing attempt to alter the status quo in the region.”

Others, like Richard Bush, director of the Center for East Asia Policy Studies, go further evaluating the chances of armed conflict between China and Japan in his book, “The Perils of Proximity: China-Japan Security Relations“. He emphasized the idea that it is incumbent on China, Japan and the Unites States to take steps to reduce the odds of clash and conflict in the East China Sea.

In spite of the high tension created by China, it seems that South Korea’s reaction of expanding its own ADIZ actually managed to bring some balance in the region. On 8th of December, South Korea announced that it is expanding its 62 year-old air defense identification zone which will cover the submerged Socotra rocks and will overlap with the ADIZs of both China and Japan. While it is true that, unlike China, South Korea announced upfront its neighbors of the intentions to expand the ADIZ, the move caught China off guard. Chinese authorities could simply not refuse Korea’s own right to expand its ADIZ.

Latest news inform about the Chinese Foreign Ministry’s intentions of creating a second air defense identification zone over the South China Sea. Such a move will definitely increase tensions and might be destabilizing to the region, as it will be perceived as provocative and aggressive by other claimant states. Debates have already started on whether the unilateral ADIZ over disputed islands in the South China Sea violates the spirit of the 2002 Declaration on the Conduct of Parties in the South China Sea (DOC-SCS).